You know, there was a time that I thought that I had dreamed this whole thing and that it never actually happened. In College, I found other, like-minded souls who had memories of it too. Perhaps I was better off remembering it as a bizarre dream.

Though it is awful, I'm amazed that Lucasfilm has yet to try and extract a buck by re-releasing this.


Update! Hey Sugar-Mama readers! Remember that Christmas gift I wanted? Well Check that, get this instead. Holy smokes is that awesome.
Posted by Jason at 3:44 PM 1 comment:

"I got you a Christmas present! Heat vision!" 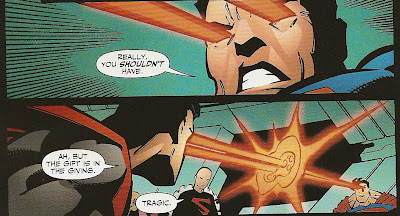 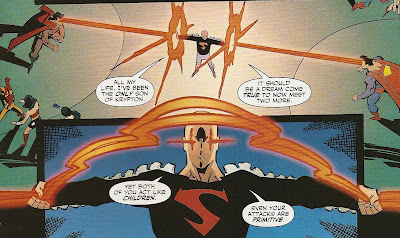 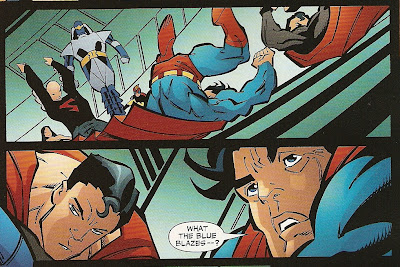 Exactly
Images courtesy of Countdown: Arena #3, in which, some young, upstart, Elseworlds Superman literally grabs two other Supermen's heat vision and uses it to bonk their heads together. Yeah, I still don't know what I think of it either.
Posted by Jason at 10:08 PM No comments: 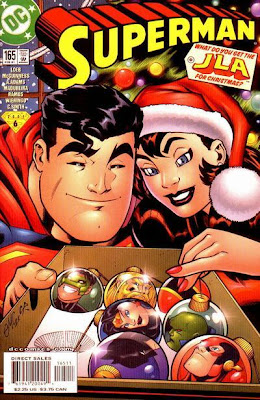 Hey all, I had planned to get some type of "Year's Best" list up this week, as no one else on the internet seems to be doing, but unfortunately, work and other, more festive, concerns have really gummed up the works here at Phoning It In Industries, so I'll have to kick that to the side for a few days. Instead, I just wanted to leave a quick note wishing you all the best over this Holiday Season and thank everyone who has come by in the past few months. As a quick "gift" to you all, here are two of my all-time favorite Christmas songs from my current two favorite Christmas albums:

Aimee Mann - You're a Mean One, Mr. Grinch

Have a good one, and hopefully I'll get something up on Christmas Eve, since I have the day to myself. That's probably a lie, since I'll probably spend the day watching an entire season of the X-Files and listening for the sounds of hooves on my roof.

Edit: Incidentally, should I have any rich, sugar-mama-ish readers out there who want to get me (or rather my inner-12-year-old) that perfect Christmas gift, here you go (thanks to Kevin for the find).
Posted by Jason at 10:51 AM 4 comments: 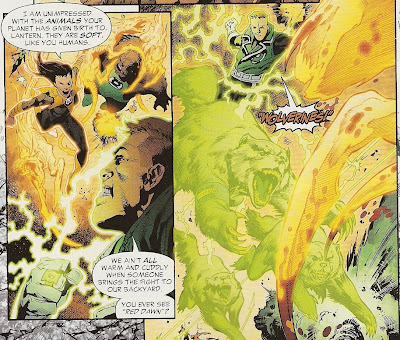 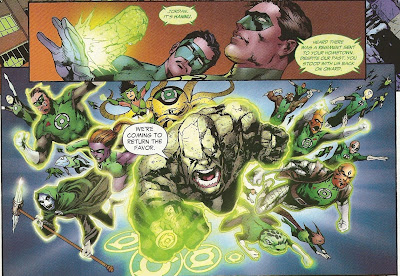 The Lost Lanterns back up Hal Jordan

Hal chin-checks Sinestro with a 2x4! 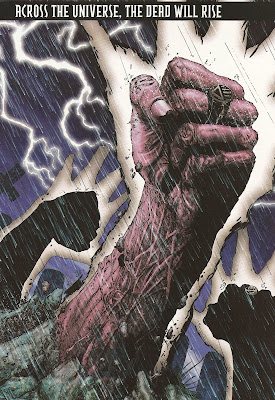 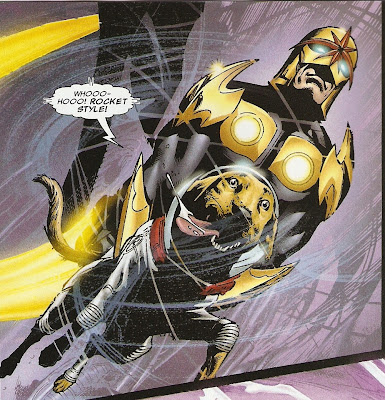 Heh, rocket style indeed.
Hope everyone is having a good weekend!
Posted by Jason at 2:07 PM No comments:

Is it bad that while I'm watching a movie these days, I'm actually writing a blog post in my head? I've become "that guy". I f@%&ing hate "that guy".

Anyway, went to see The Golden Compass" this evening and was entertained, but ultimately, underwhelmed. It had the same problems that the first Harry Potter film had, it rushes from plot point to plot point without giving the story any breathing room to draw us in. The best thing about the book was the world that Pullman built in it. He didn't explain that this was an alternate Earth, or what daemons were or any of the things that the movie explains in the opening narration. The reader was allowed to discover these things for themselves and the world of the book was very well realized. A few other thoughts, since I can't be arsed to write a full, well reasoned review:

Gaze into the dreaminess of my stare!

Anyhoo, it's certainly not bad, and it goes by very quick, but I'd recommend you to just skip it and read the book.

Space Hero and a Talking Russian Dog take on the cosmic undead at the edge of the universe. Pretty much as cool as is sounds.

My inner 12-year-old is really excited about this new X-Force (as seen here in this part of the current mega-X-crossover). I want to punch that kid.

So I just spent the last hour putting lights on my first real Christmas tree in years (my ex was allergic) before realizing that I only bought half as many lights as I'd need. Crap. I really don't want to have to go to Target (with both kids) on a Saturday mere weeks before Christmas. Oh well. Anyhoo, got the tree at Home Despot last night and it was pretty darn cheap, but the former-Boy Scout in me was screaming as the dude tied it to the top of my car. The knots! Ye gods the knots! I wanted to knock him to the ground and take over. Obviously our public school are not doing their jobs. I still tipped him heavy since, hey, it's 20 degrees and dudes' gotta deal with people a lot more asshole-ish than me.

Anyway, last year I passed on DC's Infinite Holiday Special due to some so-so reviews. But now that I realize that I missed this, I've gotta track it down. I love holiday specials. Update! Many thanks to Chris @ the ISB for pointing out that he covered my personal favorite Christmas comic a few years back. Go here to read about it (this post also includes the most articulate description of why I love Starman so much.)

Speaking of fun holiday-themed comics, this really cracked me up:

You know, I had a long, bitter post I was writing about how much I hate parents who let their kids ride in shopping carts (not in the kiddie seat, but in the basket itself), how much I can't fucking stand our President and about how Mit "freedom requires religion" Romney has upgraded himself to scaring the shit out of me. But instead let's talk about something that allows me to forget about those things. No, not alcohol, let me rephrase, let me talk about the thing that lets me forget about those things AND operate heavy machinery: comics. I only had one book pulled for this week, so I took a flyer on a few others just to see what was going on (and get myself over the $10 minimum to use my credit card, since I had no cash).

Annihilation Conquest #2
This series is definitely living up to its predecessor and it's going to places that I didn't anticipate. That's good, very good. Plus, we get more Starlord action. Not too much else to say.

Countdown: Arena #1
What a mess. Anyway, the plot of this book is that the Monarch (formerly Captain Atom) is preparing to fight some type of battle to save the universe, but he needs the best that the multiverse has to offer, so he plucks various iterations of our favorite heroes off of various Earths and decides to weed through them, death-match style. In the first issue we get the fights between the Batmen and Nightshades and neither really delivers.

Scott McDaniel's art is a little too cartoony for the high action that he is supposed to be delivering, but he does subtly ape both Mike Mignola's and Frank Miller's art while drawing their versions of Batman & Superman. I am tempted to pick up the next issue, but it'll have to pass the flip test in order to sucker me in next month.

Uncanny X-Men #493
Onto Marvel's little event they got going on in the X-Titles. While I was intrigued by the last issue of X-Factor, not enough to buy into the whole crossover, but they may have drawn me in with this. Pretty much, this is a full issue fight scene featuring the various X-Teams, all in pretty crap shape, going up against some new-school sentinels. It really reminds me of the X-Men I fell in love with back in the late 80's/early 90's and I really like what I see. I guess they've sucked me in.

Ahhhh, there I'm in a better mood. Let's turn on the Bears game and relax...aw shit, it's on NFL Network, I gotta deal with fucking Bryant Gumble? Wait, is Griese the QB, what the fuck? Dammit, can nothing go right?
Posted by Jason at 8:51 PM 2 comments: