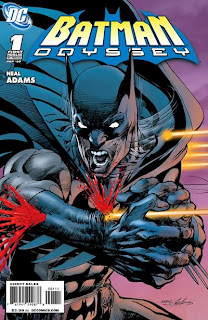 Neal Adams has returned to Batman with Batman: Odyssey, the first of two mini-series touching on the high-points of his career. While the art is certainly very nice, the story itself is lacking.

Batman starts the story, relating to Robin (Dick Grayson, though he’s drawn wearing Tim Drake’s costume) one of the earliest adventures of his career, back when he packed guns as part of his repertoire. The hook of the story is to explain to Robin why they don’t carry guns, though the phrase “Batman doesn’t kill” would seem to be good enough explanation for me. From there, Man-Bat wanders into the Batcave with some important information. Bats yells at him for using the Man-Bat serum instead of simply coming as his human self, stopping him from relaying some information that he thinks Batman needs to know. From there, Batman shows off his new Batmobile to Robin while driving/flying/boating to stop the Riddler who is, apparently, committing two simultaneous crimes.

This book is a mess, the Batman featured here seems to hew closest to Frank Miller’s “G--damn Batman” from his All-Star Batman & Robin the Boy Wonder’, berating Robin, while lamenting in his internal monologue that he should be more supportive of the boy. While I realize that historically that Batman did sport guns back in the day, I had long thought that had been retconned out, so it was just jarring to see them show up here as a plot point, the same for Dick wearing Tim’s costume. I realize that this was the first issue of a 12 issue story-arc, so it’s natural for it to throw out a lot of plot threads that will be followed up on over the coming issues, but there was a haphazardness to this that felt like it was throwing a ton of stuff at the wall, just to see what will stick. It felt like Adams drew a bunch of pages and then waited a year before worrying about grafting a plot onto it.

As for the art itself, it’s certainly very nice. Though not as smooth as his 70’s work, Adams can still draw the heck out of a Batman comic. The scenes with Batman driving his “new” Batmobile (actually a retooled model of Adams classic coup model from the 70’s) are just gorgeous, if only the dialogue written over them was not so clunky.

I had high hopes for this book, and I still do, but I can’t say that I’m not more than a little disappointed at the opening issue to this series. Hopefully, though Adams stumbled out of the gate, he’ll get back up and charge to the finish.