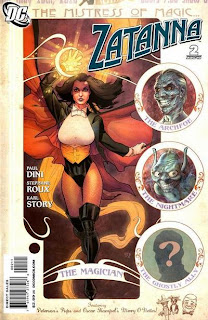 This week at Popsyndicate I review Zatanna #2:

After a slow week at the comics shop, I cast around on twitter to see if anyone had a good recommendation for a comic to review this week. The overwhelming favorite was Zatanna #2, and they were right. In current comics, it's very odd for the second issue of a new series to be a perfect jumping on point, but this one is jsut about perfect.

Zatanna, returning home after a rough night with the Justice League, just wants to fall asleep, but a nightmare-imp named Fuseli has other ideas. Since Z's home is impervious to both physical and mystical breaking & entering, Fuseli enters her mind via the nightmares of others, eventually entering into Zatanna's turning them against her. This leads to some frankly, beautiful full-page spreads by Stephanie Roux depicting their battle through the dream-scape.

Head on over here to read the full review.
Posted by Jason at 9:47 PM No comments:

In Marvel's most glaring ploy to get my business, they've brought back the main characters of the first superhero comic I started reading in earnest, West Coast Avengers: Hawkeye & Mockingbird. 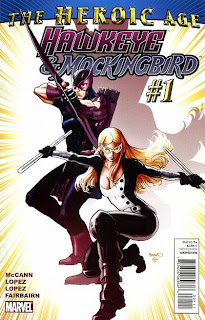 As Marvel continues their roll-out of The Heroic Age, Hawkeye & Mockingbird picks up where they left off from the New Avengers: Reunion mini-series with the heroes reunited in body, if not in spirit.

Following up on the events of their miniseries, Hawkeye (no longer using the Ronin identity) & Mockingbird are running the underground law-enforcement organization WCA (get the acronym?) and open the issue hunting down a shipment of stolen weapons.  After a car chase, they stop the shipment, and run into two blasts from their past.  First Crossfire, the villain behind the plot that got these two together in the first place, shows up, somehow involved with the weapons.  Also, conveniently, teh granddaughter of the Phantom Rider (who Mockingbird threw off a cliff in the Old West) shows up and is not too happy to see her back in the land of this living.

Read the rest here.  Also, if you're interested, check out where it started in Avengers: Hawkeye, West Coast Avengers: Assembled & New Avengers: Reunion.

Almost forgot to mention that I have a review up at PopSyndicate for Secret Avengers #1:

As The Heroic Age dawns on the Marvel Universe, Ed Brubaker tries his hand at writing his own Avengers team, bent on cleaning up the messes of the previous administration.

As in our own universe, the problem with suddenly deciding that things are going to be better now is that there are still problems left behind.  Under the care of Norman Osborn, powerful artifacts were sold off to the highest bidder, or just neglected so that any random do-no-gooder could grab them where they were left lying around.  Steve Rogers (the former Captain America), now in charge of the nation’s national security, has assembled a group of agents with the intention of using them to gather these objects.  Unfortunately, these things never are as easy as they seem.  When stealing back the Serpent Crown from Roxxon Oil, they discover that this was not the crown they were looking for, and that it may be related to Roxxon’s efforts to find oil on Mars, efforts that were suddenly abandoned and scrubbed from their records.