While I promise to bang my thoughts about Pitchfork Music Fest into some kind of post before the week is out, I figured I'd throw some songs at you. Usually when I'm leaving work for the day, I need something to play in the car to wake me up from a day of staring at a computer and trying not to put my fist through it, so here's five quick tunes that help me work the funk out.

1901, Phoenix's newest album is easily my favorite new music of the summer. Very reminiscent of Cut Copy's brand of indie-dance-pop, the whole album gets you wanting to jump up and down, but nothing is better than this, the lead track.

Though, I'll be honest, Art Brut's newest album is probably my least favorite of their albums so far, it's still damn good. This song, Eddie Argos sings about two of his favorite things in life, which also happen to be some of mine as well.

It's pretty safe to say that The Clash are my favorite band, so it's pretty easy for them to make this list. Nothing like singing this one at the top of your lungs with the windows open.

I know, I know, I've evangelized about these ladies many, many times before, but I'm just going to tell you, this is great music and if you don't like it you're dead to me. Well, not really, but let me be dramatic just this one, k?

Recently loaded Matthew Sweet's Girlfriend up on my work iTunes and damn if that isn't a perfect album. One of the few records I've listened to a million times in the past 18 years, and I still love it as much as the day I got it. And this is probably my favorite song.

So go get in your car, turn it up and have some fun people!
Posted by Jason at 3:04 PM 2 comments:

Email ThisBlogThis!Share to TwitterShare to FacebookShare to Pinterest
Labels: Music

Well, figured that post something...anything here, so here's a song with only a tentative connection to France:

Camera Obscura is a fave of mine and I highly suggest you check out their most recent album, My Maudlin Career if you like what you hear.
Posted by Jason at 9:31 PM 1 comment: 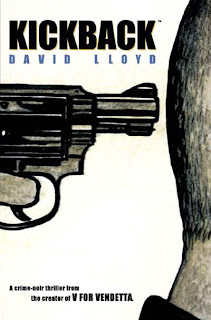 Since David Lloyd, co-creator of V for Vendetta is going to be doing a signing at my local comics shop, I decided I should catch up on his more recent work, so I picked up his 2006 graphic novel, Kickback, and it's a nice little read.

Taking place in the fictional American city of Franklin City, the story begins with the police discovering a massacre in what looks like a drug deal gone wrong. Most interesting is that one of the victims is the city's biggest gangster, and soon the entire city is at war with the police paying the highest price. In Franklin City, every cop is on the take and it is a known fact that no one can prove. Our hero (such as he is) is Detective Joe Canelli, who at least feels bad about being corrupt, but explains it away as just being "the way things are". Along with investigating the case, Canelli has to deal with odd dreams he has of waling through some type of tunnel, dreams that have something to do with a child-hood tragedy.

Overall, this is a very good book, the setting and corrupt cops angle reminds me a lot of Ellis & Templesmith's Fell, another comic about being a cop in a corrupt city. Though this book is not nearly as aggressively weird as that one. It's also evocative of LA Confidential, which is about as high a praise as I can give a crime book.

Lloyd's art is as sharp as ever, he does some great work here, though some of the coloring looks a little muddy. Part of me wonders if that's an effect of the glossy paper that the book is printed on. Though my copy of V for Vendetta was lost in a flood*, I seem to remember it being printed on a much rougher paper that gave the colors a lot more depth. Other than that, my only other issue with the book is that a lot of the street signs and other background writing was added in digitally ad it doesn't seem to mesh well with the art on the page. A minor quibble.

This is a really good book, and Dark Horse has produced a nice hardcover for it, especially at the price of $12.95.

Despite the weather being far less than ideal here in the Chicago-land area, I hope everyone is celebrating a happy and safe Fourth of July. Here's a shot of patriotism from The Muppet Show to help you get in the mood:

Video via twitter pal, Joseph Finn.
Posted by Jason at 1:31 PM No comments:

Scored a boatload o' comics at the shop today, so let's talk about them. 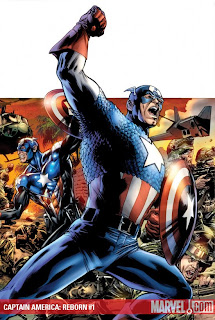 So he's back...or rather he's coming back. Maybe. But anyway, Cap's certainly alive and from the explanation we're given, it becomes pretty clear that they've been building this up since the very beginning of Brubaker's run on this series. Spoilers follow.

So Cap's become unstuck in time, and I had a feeling it would be something like this since the Red Skull and co. have made a lot of hints in the past that their plans involved one of Dr. Doom's time platforms. In the issue we are given the parallel stories of Cap in WWII, Carol trying to explain to the Avengers what's going on, Bucky & Black Widow breaking into a HAMMER heli-carrier, and Norman Osbourne meting with Arim Zola and all of them getting bits and pieces of the whole story.

Overall, this was very well done and though it's obviously a first/set-up issue, the pieces are moved into place nicely. My only problem with the issue is the art. Not that it's bad, in fact, this is far better work from Hitch than on Fantastic Four, but the inks by Butch Guice makes this look less like a Hitch book and more like a Butch Guice book. Again, I like Guice's stuff, and his art is very comparable to Epting and Perkins who were the back-bone of the art in Brubaker's Cap run, it just,seems odd. My other issue is that, during the flashback to WWII, Cap is in his Ultimate Universe outfit. I understand that Hitch probably spent a lot of time re-designing the costume for his gig on The Ultimates, but every time I saw it, it just pulled me right out of the book. These are all minor quibbles with the book, mind you. I'm really looking forward to see where this is going and I have a feeling it's going to be really good. 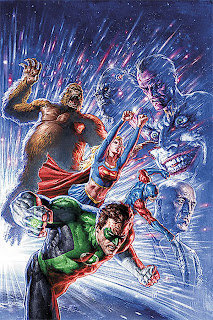 I've been excited for this book since it was announced, however the preview that had been appearing in books last month left me cold. Once again, they were running out the old trope of a pro-active superteam, one that identifies threats and takes them down before they hurt people. We've seen this before (Justice League Elite, The Outsiders, etc.) and it never works. However, after reading the first issue I'm hopeful again. After we get the opening scene of Green Lantern yelling, "Fuck you Dad! I'm gonna fight crime on my own!" at Superman, we get a gathering of heroes who have recently met with a tragedy and who doesn't think that all of them have the same cause?

Anyway, it's well done, and I'm always happy to see James Robinson going back to Opal City, but the fact that so far we've only been introduced to 5 out of the 8 members of the team means we're probably not getting to the plot anytime soon. Anyway, it's good, maybe even very good, but I'm holding off on loving it till it gets somewhere.

OK, that's it for tonight. Maybe I'll get some more up tomorrow, including the best book of the week.
Posted by Jason at 8:33 PM 1 comment: