Not all turkeys are lucky enough to get to be my delicious, delicious Thanksgiving meal, some get pardoned by the President:

Thanks to Jake Bell for reminding me of this.
Posted by Jason at 7:00 AM No comments:

"They pull a knife, you pull a gun. He sends one of yours to the hospital, you send one of his to the morgue. That's the Chicago way!"

Found: One Helping of Shame

While digging through boxes in the basement, searching for Christmas music, I found this CD: 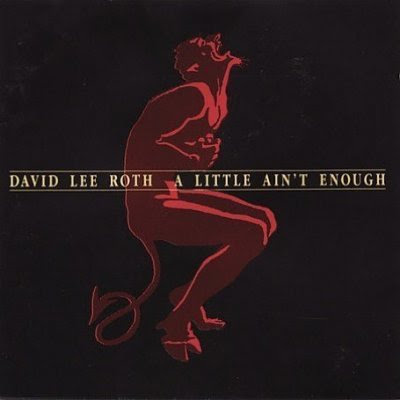 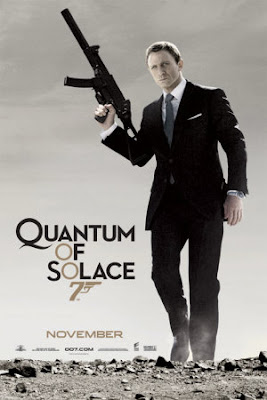 This is the most excited I've been about a new James Bond movie, probably ever. Casino Royale was my favorite movie of the last five years, maybe ten (note I didn't say it was the best, just my favorite). Since I bought that movie on DVD last year, I've probably watched it every few weeks and thoroughly enjoyed it every time. So, having narrowly survived the Great Geek Disappointment of 1999, I prepared myself to be sorely let down by QoS. Fortunately, that was not the case, while certainly not the revelation that Casino Royale was, it's a solid, entertaining movie that finishes what CR began by showing the beginning of 007's career.

The first thing you notice about the movie is that it is a true sequel to the previous film, beginning minutes after that one ended and following up on the organization behind that movie's villain. From there, it becomes a much more conventional Bond flick. Bond globe-trots to several stunning locales and uses what has to be one of the worst investigative techniques ever, the old "kill a random dude, take his place and see where that gets you" trick, but it always seems to work for him (see also: Diamonds Are Forever). They also bring back the 21st Century version of SPECTRE, QUANTUM. Unlike SPECTRE, this group seems to be more about making money than chaos, but it does make me wonder, how much more money could a secret organization make rather than a regular, corrupt multi-national corporation. Honestly, they can't be any richer than Exxon, can they?

Anyway, Bond moves through the organization's layers, trying to figure out both what their ultimate plans are (this time at least) and also find out whether his lost love, Vesper, betrayed merely her country, or him too. By the end of the movie, these questions are answered and dealt with in satisfactory fashion. In that lies this movie's strength, as it shows us the evolution of how Bond became the guy we've known all of these years.

However, there are weaknesses here, the biggest for me were the action sequences. They were all very quick-cut and closely shot. This seems to be something that happens when a director is making their first action film, as another good example of this were the fights in Batman Begins. Christopher Nolan framed those fights very close up and you couldn't really tell what was going on and it always kind of irked me. You can't tell whose fists were whose, and it was very confusing. Now, this could have been the directors' intent, wanting to establish that fisticuffs are confusing and jarring, but it's just not pleasant viewing. The other thing was the very tight framing of the characters in the action scenes, when you're filming a chase across Siena, Italy's rooftops, it helps if you back off a little to establish where the individuals are in reference to each other. I know, this sounds like little shit, but it bugged me.

Oh yeah, there were also plot holes and implausibilities so big, you could drive a truck through, but hey, a Bond flick without those just wouldn't be a Bond flick. Anyway, here are some quick bullet-points with some of my more random thoughts about the movie:
Also, some non-Bond related bullet-points:

So I liked this movie quite a bit, though I'm not in love with it yet. I have a feeling that I'll be catching this one in the theatres at least one more time (especially since there's a rather weak slate of films this season), so we'll see if it will overtake Casino Royale in a year's time, when it's ten o'clock and I'm looking to turn off my brain for a few hours.
Posted by Jason at 9:20 PM 3 comments:

Bahlactus put out the call for someone to take up the mantle.....and SpaceBooger has answered! 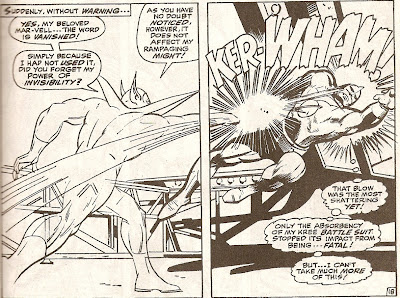 A punch so powerful, Mar-vell is knocked into the next panel!
Image taken from The Essential Captain Marvel, which, to be honest, is a little bit of false advertising. Originally published in Captain Marvel #2.

I was going to save this for Friday Night Fights, but some things just can't wait. Such as: Hawkman hitting a winged, mutant gorilla with a mace. 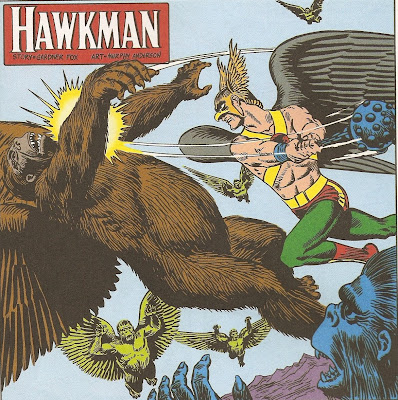 Image taken from the recently-released DC Goes Ape trade-paperback. This book also features one of my all-time favorite, out-of-context panels. Unfortunately, Chris Sims got to it first.
Posted by Jason at 9:28 PM 1 comment:

Get the latest news satire and funny videos at 236.com.

Thanks to BeaucoupKevin for bringing this to my attention.
Posted by Jason at 7:15 PM No comments: 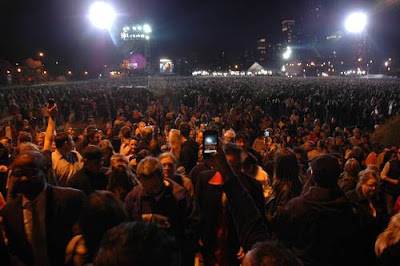 Though not my picture, this is pretty much my exact vantage point on the action last night. President-Elect Barack Obama was barely larger than a pin and I could only catch glimpses if I stood on my tip-toes. But damn, was it worth it.

We didn't head down to the rally until close to 8:00 and, though we had to wait in a line that snaked almost completely around the whole of Grant Park itself, everything moved rather quickly. We finally made it on to Hutchinson Field just when CNN declared Virgina for Obama. Maybe ten minutes later, they called the election and the place exploded. It was an amazing moment, an out-pouring of pure joy from over 100,000 people at the same exact time and that moment will be an experience that I will treasure.

After that, we stood at rapt attention while Sen. McCain delivered his gracious concession speech. The crowd was very respectful and there were very few boos. Though, the petty bitch in me took schadenfreude at the fact that Sarah Palin could barely hold the fake-smile on her face, watching her moments in the lime-light tick down to zero.

After that, I lit up my victory cigar and began the interminable wait until PRESIDENT-ELECT BARACK OBAMA began his victory speech. The speech was well done, but by the time it came, the crowd was almost spent, and Obama looked like he was too, he poured every iota of energy he had into this campaign and he's more than earned his exhaustion (and hopefully twelve hours of uninterrupted sleep).

I could babble on more, but just suffice to say, I had an experience unlike any other last night, and though my legs are killing me, I wouldn't have traded it for the world. For the first time in a very, very long time, I'm excited for the direction our country is headed in.
Posted by Jason at 9:16 AM 2 comments:

Whatever else you're doing, I sincerely hoping it includes voting, even if it's not for the obvious choice and instead for the Accursed Richards.

Anyhoo, later this evening, I hope to overcome my innate laziness and love of the booze to go on down to Grant Park to (possibly, hopefully) experience some history first-hand: 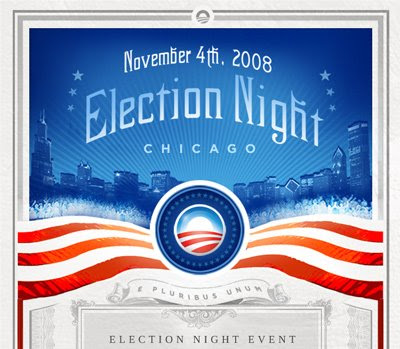 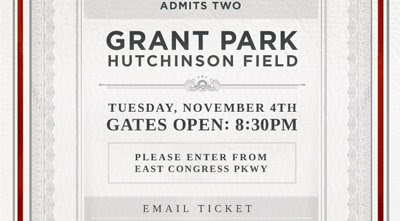 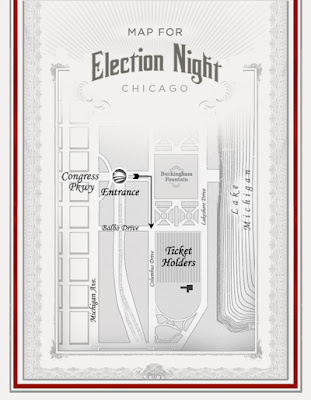 Either way, get on out there and get your civic duty on!
Posted by Jason at 12:01 AM No comments:

So, after yesterday's post, I'm fairly certain you're wondering to yourself, "Did Captain Marvel Jr. only beat up on the Japanese during WWII?" Well, as an answer, let's go to this page of Cap Jr. facing down (the completely useless) Captain Nazi: 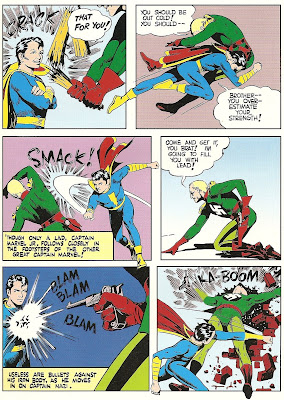 *As with yesterday, this page is from Shazam! Family Archives Volume 1, a book that makes you cringe from its use of both race and grammar. However, man, that Mac Raboy was a fantastic friggin' artist.
Posted by Jason at 7:00 AM No comments:

Have you ever wondered to yourself, "Captain Marvel Jr., he's cool, but is he bad-ass?" Well, thanks to Shazam! Family Archives Vol. 1, I have an answer for you.

First, after finding out that the Japanese plan to bomb a secret American base in Alaska*, he then proceeds to beat the shit out of the Japanese airplanes: 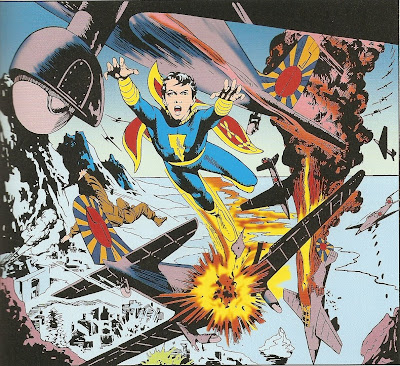 But wait, that's not enough for our young Marvel. After defeating the airplane armada, he then goes to town on the pilots as they parachute to (relative) safety: 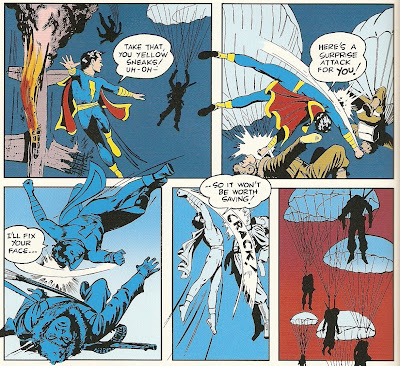 1942, Ladies and Gentlemen! That's why they call them the greatest generation, not the "classiest" and certainly not the "most racially sensitive". Always leaves me feeling a little dirty when I see shit like that.

*He finds this out after cracking a, frankly, insanely stupid plan by Japanese spies to communicate their "secret" plans through the use of secret-coded birthday balloons. What a bunch a' maroons.
Posted by Jason at 7:00 AM No comments: