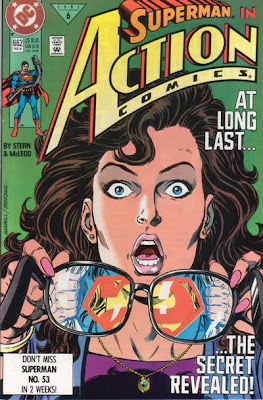 Following up on last year's cross-blog event, "My Scott & Jean", the Alert Nerds have thrown down the gauntlet once again. This year's event is "True Geek Confessions" and I'll let them explain it:

Unpopular opinions: we can haz them. Sometimes you stand alone in loving a super niche-y run of a popular comic book series. Sometimes you’re the only person on the entire planet to ’ship a certain ’ship. Sometimes you simply Do Not Get a movie the rest of your geeky brethren is falling all over themselves about. And because a lot of fandom is about sharing loves and hates and communing with your fellow geeks, this can feel awfully lonely.

For a while there, I didn't think I really had one, but reading through Dan Faust's excellent post on the Family West, I realized that I had a similar love that largely goes unshared by the geek community: the marriage of Clark Kent & Lois Lane. Even as child, the dysfunctional love triangle that existed between Lois, Clark & Superman bugged me. Superman always seemed like kind of a dick, and Lois was necessarily portrayed wither as clueless, or as a shrill harpy, bent on getting Superman to marry her*. As befits the premiere investigative journalist of a major metropolitan newspaper, it seemed silly that Lois wouldn't be able to defeat Clark's cunning disguise of horn-rimmed glasses and brylcream eventually.

So in 1996 it happened, though Lois didn't figure it out for herself, the reveal was well done, with her slapping Clark for leading her on as two separate men for years, but their love won through and they were married. though the writing of their marriage hasn't always been perfect, there have been some wonderful moments that make me so happy that DC allowed them to "take the plunge". A personal favorite is the moment in Superman: Up, Up and Away by Kurt Busiek & Geoff Johns. After Superman lost his powers post-Infinite Crisis, he and Lois got to spend a blissful year as a "normal" couple, but eventually his powers started to reemerge. Though Clark thinks that his wife will be angry or upset that she will be "losing" her husband once again to the craziness of the superhero lifestyle, she only has three words for him: "Go get 'em".

Lois and Clark as a married couple compliment each other really well, she's not the hand-wringing wife, waiting for her man to come home from the fight, she's out there on the street getting the story, and though she needs saving every once in a while, she does a fair bit of saving her man's ass as well. It's nice to get to see my childhood heroes get to behave, and grow, like adults.