Continuing my week o' shows, tonight, we have shoeazer legends My Bloody Valentine. Despite the hefty price ($40 before fees) and the crap venue (the cavernous Aragon Ballroom), I knew if I skipped this show, I'd be kicking myself for eternity. Needless to say, I'm excited...and I'm bringing earplugs. Enjoy this little slice of feedback-y heaven:

Beginning tonight, I'm seeing a stunning 3 live shows in one week. This may not seem too amazing, but seeing as I'm getting old, I can't remember the last time I had a log jam like this. Fortunately, all three bands are favorites, especially tonight's, the Canadian pop outfit Stars. I've been a fan since picking up their first EP A Lot Of Little Lies For The Sake Of One Big Truth. I own all of their albums (all available on eMusic), and there;s not a clunker in the bunch, though I'd start with their latest, In Our Bedroom After the War. Here's the video for one of my favorite singles, Elevator Love Song:

Get Your War On: Animated

This is so fucking wrong, but it makes me laugh so much:

Oh, this one cracks me up too:

As a huge Chicago Cubs fan, I am unbelievably stoked that they've gotten into the post-season yet again. However, as a Cubs fan, this means, that a week from today I will be entering into a new form of daily stress, that which is only rivaled (in my experience) by having a newborn child. So, if I start updating with nothing but tirades of expletives, I hope you understand.

Anyway, I guess I'll just soak it in for the next few days. Here's something to enjoy, though I'm not the biggest fan of Pearl Jam, or, Eddie Vedder, I've gotta admit, his Cubs song, "All the Way", isn't bad:

While I am very thankful that you have decided to collect my childhood favorite, Justice League International into some very nice hardcovers, but, couldn't you have fixed some of the rather sketchy lettering? For example: 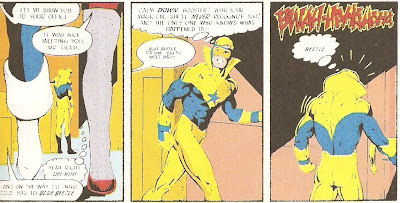 I understand that it was the same in both the original issue and the first paperback collection, but come on, I'm now buying this book for the third time, why can't you help me out?

Then again, this new collection did provide me with the wonder of this full-page throw-down between Rick Flag & Batman: 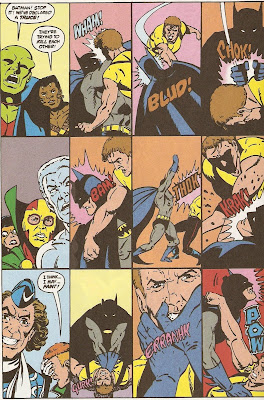 So I guess I should just shut my yap and wait patiently for volume 3.
Posted by Jason at 4:47 PM No comments: 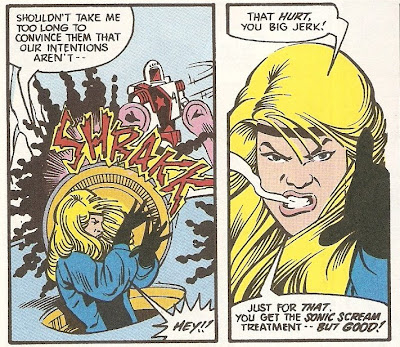 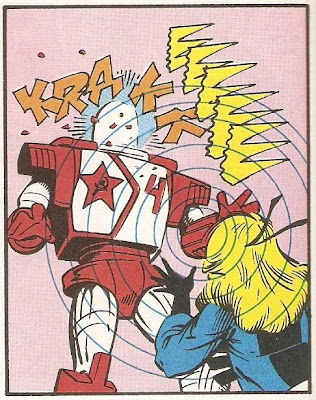 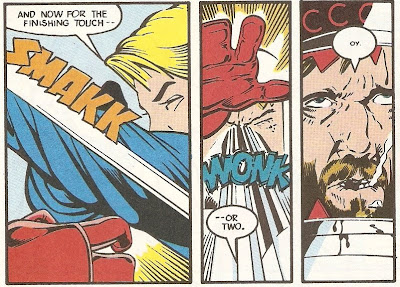 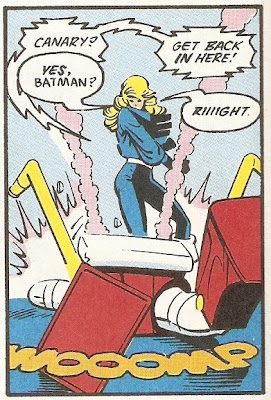 Ahhhh...feels good to be back. Thanks be to Bahlactus!
This little slice of heaven was brought to you by Justice League International Volume 1.
Posted by Jason at 7:56 PM No comments:

Anatomy of a Pull-List: Yet Again

Conditional Jeff's recent post on his pairing down of his pull list has led me to take a look at mine. Back in March '07, I blogged about it, so I figured I'd do it again. I'm of two minds about my pull list, while I enjoy reading comics, I really don't care for collecting them. I'd much rather have a square-bound book I can throw on a bookcase rather than a floppy I'll just end up throwing in a plastic tub in the basement. I essentially have two rules when it comes to buying singles, generally, I'll only buy titles if:
With those rules in place, let's see what's on the list:

Blue Beetle: Perfect example of rule #1. A fantastic book that nobody buys. A fun yet poignant look at what being a teenage superhero really could be (at least in the DCU). This is the type of book everyone bitches that comics companies don't publish anymore. Unfortunately, the same people who bitch like that, don't buy this book.

Manhunter: Rule #1. On the other side of the spectrum from Blue Beetle, there's Manhunter. This is a dark(ish), street-level, superhero book that still manages to be light on it's feet. This book proves you can explore "adult" themes in a superhero book without having to lean on rote uses of bad language and sex. Really, this book and Blue Beetle are very similar, in that they are about new heroes, still finding their way in the DCU. Also, they both feature a very deep cast of characters that both lean on, and enrich, the underlying continuity of the DCU.

Booster Gold: This series is a lot of fun and nobody buys it. Rule #1.

The Immortal Iron Fist: I have a lot of love for Ed Brubaker and Matt Fraction. Put plainly, they're easily my favorite writers working today. The fact that they tend to work together is even better. Oddly enough, after 16 amazing issues of Iron Fist (and a gang of Specials and Annuals) they departed for the more lucrative waters of the X-Men. Normally, that would lead me to drop a title, but, after two issues of Duane Swierczynski and Travel Foreman's run, I think I'm staying on this book for the long haul. Though Foreman's work isn't really to my taste, the writing is mirroring Bru & Fraction's deft touch..

Hellboy: Hellboy is a tough nut for me. On one side, this was originally a rule #2 title, in that we were lucky to get a mini every two years or so, but now that Mignola is farming out the art (to very gifted artists, mind you) the series is coming out at a quite regular clip. I should switch to trades, but it's so darn good.

Nova: I've long had a soft spot for Nova since I was a kid and the current series, launching out of the superlative Annihilation event is a hoot. The only problem is that it's almost doing too well. I may have to drop this one in favor of trades soon.

X-Factor: This series, on the other hand, is gone. Despite holding up admirably in the face of God knows how many cross-overs and tie-ins, there just doesn't seem to be any actual story there any more. I re-read the first few years of this book and I forgot how good it was when they didn't have to deal with the House of Civil Invasion We Stand bullshit.

Criminal: Criminal, which could easily fall under rule number 1, also has the distinction of having created the new, Rule #3: the single issue delivers more content than the trades. Criminal is almost more than a comic, it's a crime magazine. The back-up essays (which are not in the collections) are almost worth the price of admission on their own. I almost inevitably end up running to my Netflix cue the evening when the newest issue comes out, and that's a good thing.

Fell: Well, though this book came out at a fairly good clip originally, it's fallen into a rule #2 book. That said, it also usually as some good backmatter and hey, it's only $2, so you really can't go wrong.

Trinity: You know, I really liked 52, it was far from perfect, but it was great to have a book that you wanted to read there every week. Luckily, I sat out Countdown, since conventional wisdom has indicated that it was crap on toast. Due to Busiek being in the driver's seat on Trinity, I was in from the start, and, to be honest the jury is still out. I've enjoyed what I've read, but man, it's pretty dense, and I don't even think they've gotten to the main plot line yet. I have the last 14 weeks of books in a stack, so I think next weekend, I'm gonna go through i all in one sitting and make a final decision to see if I'm in for the long haul.

Planetary: Oh yeah, almost forgot this one. Apparently, there's one more issue to go, I'll be lucky if I see it before my 5 year-old hits college.

So that's what I'm getting. There are a few other books that I'll pop in on here and there, but these are the only ones on the official list. Here's a quick look at what I've dropped recently.

Astonishing X-Men: A rule #2 title, but once Whedon finished his run, the getting seemed to be good. I'm sure I'll pick up Ellis's run in the trades, but it's not required reading anymore.

Ex Machina: Bunch of reasons for dropping this one: 1) it doesn't need me anymore, I have a feeling Vaughn has the rope to run this title as long as he wants. 2) the schedule is spotty. 3) It reads far better in collected form. 4) Those hardcovers they just started coming out with are purty, so that's the far better investment for me.

That was fu, maybe I'll hit up the series I'm getting consistently in trade-form next, but that could be just too depressing to contemplate.
Posted by Jason at 9:58 PM No comments: