So it came to pass that Free Comic Book Day has descended upon us once more, on this absolutely beautiful (at least in the Chicago-area) Saturday in May. I headed over to my local comic shop to check out the wares and was not disappointed with the selection and there was already quite a crowd, even though I arrived just a few minutes after opening. Skottie Young, artist on Marvel's adaptation of The Wonderful Wizard of Oz was already signing and doing sketches, so I quickly jumped in line. Chris Mitten, artist on the very good Wasteland, soon joined him. I managed to get something signed by each of them, along with these two sketches:

First, I had no idea what to get, since I didn't expect them to be doing sketches, so I didn't think about it ahead of time or bring any reference material (or even a sketch-book). Fortunately, I overheard Skottie Young saying that he had just finished re-reading NextWave, so I immediately knew I needed a sketch of Machine Man: 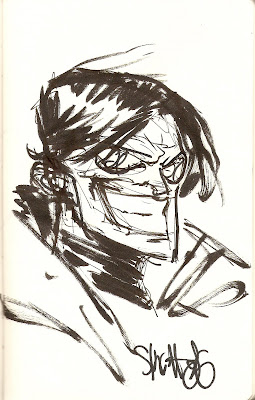 Next, I asked Chris Mitten to draw Michael, from Wasteland: 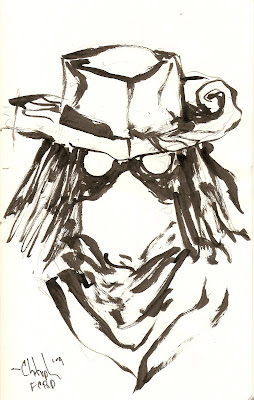 Both of the guys were great to talk to and I'd highly recommend seeking them out if they're at a convention near you.

Amazing Fantasy did their usual bang-up job with the event and everyone had good things to say about them, I love that shop and it's nice that I've never had to shop at a crappy comics shop in my life.

As for the comics themselves, I'd highly recommend picking up the Atomic Robo book, the short story contained within is a hoot and worth the (no) money for the last page alone. DC's Blackest Night #0 is OK, pretty much a trailer for the upcoming event, but there's still some nice interaction between Hal Jordan and Barry Allen in there, actually, it was better than Flash: Rebirth #1 in that respect, but I don't know if that's a function of this book being that good, or that book being that bad. Marvel's Avengers book is a fun little story and is good for bringing people up to speed on the current clusterfuck that is Avengers continuity, it's a good example of taking a crappy status quo and spinning an OK story out of it.

So anyway, it's still reasonably early on this most comic-booky of holidays, so if you can, get out there and get yourself some comics! Buy some too!
Posted by Jason at 4:07 PM