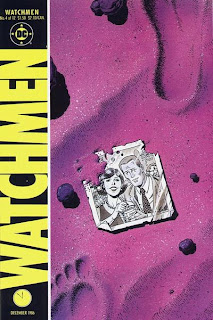 Chapter four of this book is a tough nut to crack, perhaps because it is the most straight-forward so far. It features Dr. Manhattan on Mars, recounting his life story. From boyhood, teaching himself to be a watch-maker (Hey there symbolism! Glad you could drop by!) to becoming a physics researcher for the government, to the accident that turned him into something far more than human.

Essentially, we also get a brief history of the latter 20th century of the world of Watchmen. Manhattan's very existence serves to completely tilt the balance of the Cold War so that it's no longer just a balance between the U.S.A. and the U.S.S.R., instead (as is spelled out in the essay in the back), it's now a ticking time bomb until Russia finally gets fed up and decides to put "America's Superman" to the test by asking him to catch a whole gang of nuclear warheads.

Manhattan has made the whole of humanity obsolete. In a telling scene between the first Nite Owl and Dr. Manhattan at Owl's retirement party, he mentions to Manhattan that he's going to fix cars. Manhattan immediately responds that the new electrical cars he has made possible will be even "simpler" than current automobiles. Poor Hollis Mason, the man is effectively pushed out of two lines of business by Manhattan's arrival, and he seems to be the stand in for everyone.

The one thing I question about Dr. Manhattan is that he is most likely the book's biggest tragic figure, since he can see the future and obviously knows both the horrors that are to come, but that he is also powerless to stop fate, but I don't know if he can feel the tragedy in that. It's been shown that he does feel emotion (his outburst of anger when the press turned on him, for one), but while do get overtones of sadness from him, I don't know how he feels about all of this. I'll keep a look out for that as we go along.
Posted by Jason at 8:07 PM